Did you hear about the London eye? 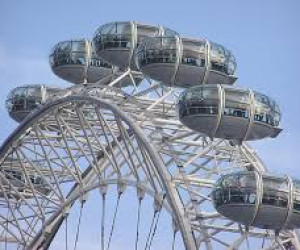 The London eye has become the latest landmark tourist attraction for the people holidaying in London.  The 135 meter Ferris wheel weighs 1700 tons and took more than a year and a half to construct. It was built in the year 1999 and is also known as the Millennium wheel. The glass capsules give a 360-degree view of London to the tourists. The Buckingham Palace, St. Paul’s Cathedral and the Houses of the Parliament are clearly visible. The night views are even more spectacular. The wheel rotates slowly allowing the people to disembark and embark with ease. The round trip takes 30 minutes.

London eye is the latest attraction, but there is much more to London besides it. The 2000-year old river Thames flows through the center of London and you can view the city’s top tourist attractions as you travel along it. These include the Tower Bridge, Big Ben, Westminster Abbey, The Shard and Tower of London etc.There are the river bus services, cruises and speedboat tours for the tourists who want to see London through the waterway. You can dine and enjoy on the cruises as you watch the beautiful city.

The best way to come to the city is by taking an international flight to the Heathrow Airport. From the terminals 2, 3 & 5 you get the Heathrow express train which ferries you the center of London in 15 minutes. If you land on terminal 4 you can take the connecting train to terminals 2 & 3. The Heathrow express train leaves every 15 minutes. Besides the Heathrow airport in the west, you can get to London by the three other airports, London Gatwick (south-east), London Stansted (north-east) and London Luton (north).

Some of the tourist question “Is it worthwhile to buy a London Pass?” Well, it certainly helps as you are able to see many tourist attractions free and also jump the queue in some to save time.

London the capital of the United Kingdom is famous for its culture. The British Museum, the National Gallery and the O2 are notable cultural attractions. The Royal Philharmonic Orchestra and the London Symphony Orchestra are world famous. Come August and London is host to the cultural festivals Notting Hill Carnival and Carnaval Del Pueblo.  Both of them have parades with dancing and lots of music. The city boasts of dance theatres like the iconic Royal Opera House, Sadler’s Wells Theatre and the London Coliseum.

London is home to about 240 museums, galleries and other institutions of cultural significance. The British Museum and The Natural History Museum are well known. The Avenue of Stars is a walkway pretty much similar to the Hollywood Walk of Fame.

The city has a string of restaurants with innovative chefs to cater to all tastes and tourist demands. After a hectic visit watching the city’s heritage, you can relax with wine and sumptuous food at these interesting restaurants.