Blast from the Past: 5 Things You Should Know Before Playing Far Cry 5 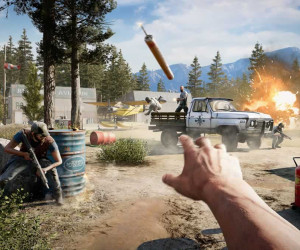 Some PC games from the good old times simply need to be revisited. One of them is Far Cry 5, which has been a blast for some years now. However, when closely reviewed, the game seems to be missing some essential features.

In Far Cry 3, there was a poker mini-game that you might remember. No-Limit Hold 'em was a great way to raise some money for your quests and get yourself some serious gear. The Hold 'em poker mini-game can get unlocked after taking over the Valsa Docks outpost from Amanaki to the west. Although the atmosphere and offering can't hold a candle to other virtual casino environments (like this one - Canadian online casino real money), these mini-games are the next best thing and almost the same as the "real one," so all the betting lovers got hooked right from the start. Unfortunately, Far Cry 5 doesn't contain any of the poker, roulette or other mini-games.

Altogether, you could have found eight poker games in Far Cry 3's North and South Island. However, after you unlock the first game (through conquering the Valsa Docks on the North Island), you can find more of them! Unlike Far Cry 3, Far Cry 5 (as well as the number 4 before it) has arrived without the mentioned feature.

Since Far Cry 3, each game has featured a famous antagonist and other exceptional side characters that have had some decent performances across the board themselves. Far Cry 5 is no exception to this rule.

The game's bold script and stellar voice acting are present, even more than ever before. Open-world-game

Perks as the Key to Success

Perks system includes completing challenges for getting perk points. However, earning XPs to earn skill points is now in the past. In the 5th edition of this open-world game, perk points are everything.

A certain number of weapons or specific kills can bring you points that get you different perks, like Harvest Master that doubles rewards from plants and animals. Also, the perk points could have you get some fine Health upgrades.

Make It Simple, and Just Explore

A lot has changed since the days of climbing towers and littering the map with dozens of icons. In the new game, there is a 3D map and binoculars that can be used to place a waypoint in a distant location.

Road signs will reveal hunting spots, finding maps will find essential buildings near you, and some of the side characters could help you out – talk to them and don't be shy!

Breath of the Wild has a similar "exploring experience" as Far Cry 5, with significant discoveries, improved maps, and unforgettable scenes.

Get the Cash Flowing

Making money is no longer as easy as it used to be in the good old days. In Far Cry 5, you should focus on the right things to get the cash in your pocket. In previous Far Cry games, money used to be acquired easily and accumulated quickly.

Hunting and skinning animals is no longer needed for crafting things, so it is a good option for making money. Also, the Harvest Master perk doubles the rewards from animals. So, $450 for a cougar skin? Not that bad, right?

Also, keep your eye for safes and side buildings. Placing an explosive on them does the job, with no locksmith or repair torch needed. The blasting method could be a great "side-hustle" and a good income of cash.