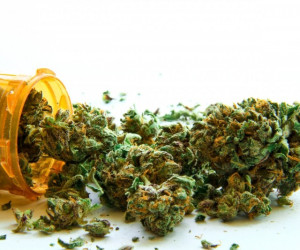 Pharmaceutical variants of cannabidoil—a compound found in cannabis—could be used as a form of treatment to reduce the fall-related seizures in treatment-resistant epilepsy patients, according to a new research.

According to a three-month clinical trial published by The Lancet, people with Lennox-Gastaut syndrome—a severe and lifelong form of childhood-onset epilepsy—who had previously been proven to be resistant to conventional treatments, were found to have showed positive effects from cannabis-based treatment

The trail reduced the frequency of seizures in epilepsy patients, with just 10% previously shown to respond to conventional drug treatments. The authors however, said that the efficacy and safety of utilizing this new treatment "now needs to be confirmed".

“There is an urgent need for novel treatment options for patients with Lennox-Gastaut syndrome, and we are pleased that our study has potentially found an additional option to add to patients’ existing treatment to reduce drop seizures,” said Dr Elizabeth Thiele of the Massachusetts General Hospital, and lead author of the study.

Thiele added that, the application of cannabidiol—with existing products such as CBD crystals—as a form of treatment in epilepsy patients, can be used alongside other conventional anti-epilepsy medications.

"Our results suggest that the use of cannabidiol as an add-on therapy with other anti-epilepsy drugs might significantly reduce the frequency of drop seizures in patients with Lennox-Gastaut syndrome," Thiele said.

"This is positive news for these patients, who often do not respond to treatment."

The study was conducted on 171 patients between the ages of 2 and 55 from the US, the Netherlands and Poland—all displaying a variety of seizures in the past six months. Also, the patients had all proven highly resistant to conventional treatments.

They were each administered a pharmaceutical formulation of cannabidiol (CBD), or a placebo, via a 50:50 split on a daily basis.

At the conclusion of the trial, drops seizures which are caused by a lack of muscle tone, had significantly reduced in patients treated with cannabidiol by 43.9%, while there was a 21.8% decline for those taking the placebo.

Patients in the cannabidiol group also saw a higher reduction in other seizures, with overall reductions of 41.2% compared with 13.7% for the placebo group.

However, 62% of the cannabidiol group also showed side effects from the treatment, ranging from the very mild to the more serious, including diarrhoea, fever, drowsiness and vomiting.

Though, most such side effects were found to have been resolved during the trial.

“After many years without promise of new treatments in Lennox-Gastaut syndrome, this is an exciting time for patients and clinicians,” said Dr Sophia Varadkar of the Great Ormond Street Hospital for Children NHS Foundation Trust in the UK.

Another group of researchers, enrolled children with Dravet syndrome—a very rare and often deadly form of epilepsy caused by a genetic mutation. These children exhibited multiple, prolonged seizures that lead to brain damage.

“It's hard to portray how serious and devastating this is,” Dr. Orrin Devinsky, director of the New York University Comprehensive Epilepsy Center, told NBC News.

Devinsky and a team of researchers around the country carried out a test using CBD on 120 Dravet syndrome patients.

For 14 weeks, half were treated with CBD and the other half got a placebo.

"Seizure frequency dropped in the cannabidiol-treated group by 39 percent from nearly 12 convulsive seizures per month before the study to about six; three patients’ seizures stopped entirely,” the team wrote in the New England Journal of Medicine.

“In the placebo group, there was a 13 percent reduction in seizures from about 15 monthly seizures to 14,” they added.

“Quite remarkably, 5 percent of the children in the active treatment group with CBD were completely seizure free during the 14 weeks of the trial,” Devinsky said. “And these were kids who were often having dozens of seizures, if not many more than that per week.”

However, the children who were treated with CBD were more likely to quit the trial because of side-effects.

“Side-effects were generally mild or moderate in severity, with the most common being vomiting, fatigue and fever,” Devinsky wrote.

It is expected that more data and clinical experience of cannabidiol on several forms of epilepsy syndrome is expected.