How to Enjoy the Best of Montreal Without Leaving the House 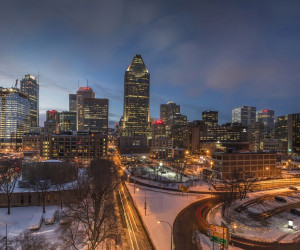 Montreal is a city whose star is on the rise. Following a giddy few years of sweeping up just about every international accolade you can think of, from the Economist Intelligence Unit's (EIU) "world's most liveable city rankings" to bagging itself the smart title of being a UNESCO City of Design, it seems that the whole world now wants a piece of the City of Saints. Montreal has long shaken off what had always been a completely undeserved reputation for being a dull, quiet city, to becoming a globally recognised entertainment capital in its own right.

With more restaurants than you can shake a stick at and enough bars, nightclubs, festivals and live music venues to rival what's on offer in New York or London, there are few better cities in which to have a good time. While getting out and exploring all of the distractions this city has to offer is always worth doing, sometimes we just want to stay at home. Luckily, you can experience the very best of Montreal's nightlife, dining and entertainment scenes without even leaving the house. Here's how:

It's easier than ever to experience the kind of entertainment Montreal offers from the comfort of your home. You can enjoy the stunning street life and architecture of the city by simply firing up Netflix and watching iconic films like The Notebook and Catch Me If You Can, both of which were filmed here in the city. You can also enjoy some more high-octane entertainment. While Montreal has one of the most thriving casino scenes in the northern hemisphere, with the legendary Montreal Casino perched on Notre Dame Island, you can experience the excitement of the slots and poker tables from your living room by hitting up the Online Casino Games at Casino.com Canada. Make sure to cap your big night in with a couple of classic Montreal cocktails, consisting of rye whisky, vermouth, anise liqueur and bitters. What's not to like?

Montreal has long been recognised as a foodie haven, with the intoxicating blend of American-European fusion and traditional cuisines earning it a GQ Magazine title as "the ultimate food heaven". There are thousands of restaurants which cater to every taste and budget, with every neighbourhood having a distinctive flavour which means that no two meals out in this city are the same. If you are craving a classic poutine or some avant-garde French fusion but don't have the energy to leave the house, this city has you covered.

Food delivery platforms like Foodora or Uber Eats mean you can access the entirety of Montreal's culinary landscape at the touch of a button, with even the best restaurants offering delivery. Soak up some of the greatest hits by ordering in a steaming Muhammara pizza from Boulangerie Al-Touras or maybe a classic hot dog from La Quebcoise. If you're feeling something a little more heart-warming then the legendary pho from Delicieaux should hit the spot, or just do the ultimate local experience and grab a smoked meat sandwich from Dunn's Famous Decarie. Whatever you choose, this city has your cravings, comfort and convenience well and truly covered.

Stepping out and enjoying the sights, sounds and smells of Montreal is always a good idea and, luckily, you can do so with as little effort as possible, thanks to the wonders of modern technology.